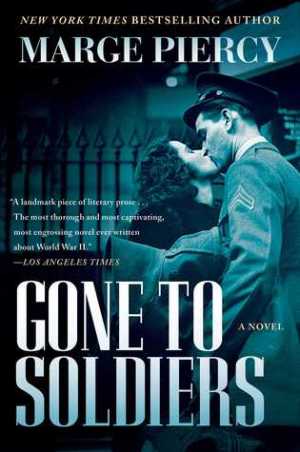 The history of World War Two we learnt at school went something like this. There were these bad people in Germany called Nazis, who invaded other countries and were cruel to people, especially Jews. The British (and belatedly the Americans) were the good people who went in and saved everyone. It would be nice to think that as we grow up we realise it isn’t quite that simple, but that still seems to be the dominant narrative in much of the media and popular culture.

Gone to Soldiers presents a much more nuanced view. It follows a number of loosely linked characters from the start of the war. Their stories take in a range of locations, nationalities and situations, although American, female and Jewish characters all feature prominently. The action spans four continents and takes in battles, intelligence, resistance, factory work and the concentration camps.

What Piercy does so brilliantly is tell an epic story, covering the big political and moral issues, while giving you vivid, believable characters, and making them each the centre of their own narrative. There is heroism and brutality but there are also stories of love and ambition, of small acts of nobility and selfishness, of the ways which people find to survive. Some of the characters experience unspeakable horror, others bleakness and deprivation. For some, especially women, the war brings opportunities.

Piercy highlights the moral ambiguities of the conflict. The reluctance of western countries to welcome refugees is highlighted. Many on the Allied side believe leftists and Jews are more of a threat than Fascists – leading the US to initially side with the Vichy government rather than anti-colonial and resistance fighters. Women form an essential part of the wartime workforce but are still regarded as inferior by many, their status provisional.

At the start of the book many just don’t believe that war and barbarity could happen in their enlightened world. Nowhere is this more clearly shown than in the story of Jacqueline, a French-Jewish teenager. Her narrative begins with an endearing mix of cleverness and naivety. She is dismissive of her father’s Zionism, seeing herself as internationalist, secular, trying out lofty opinions and philosophical ideas. Even after the Nazi invasion, she initially feels that life has changed little, that people’s fears have been exaggerated. Of course, her innocence is short-lived.

This book is totally immersive in the way that only long novels can be (in the acknowledgements Piercy says it would have been even longer, but she couldn’t get the funding for a research trip to the Soviet Union). It forces you to consider what you could endure, if you had to, whether you would be brave or look the other way (of course none of us thinks we would be a collaborator or a profiteer). It makes you wonder if we, like Jacqueline, think this couldn’t happen to us, even as many of the events in the book resonate today.

Enjoyed this? Take a look at my review of A Treachery of Spies by Manda Scott