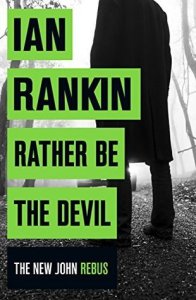 I’ve always enjoyed the Rebus novels. They’re the reliable page-turner you’re guaranteed to find on the library shelf. But they’ve never quite made it to must-read status with me, so I’m not fully up to speed on the backstories of the main characters.

In this novel Rebus is retired and restless. A dinner date at the Caledonian Hotel in Edinburgh sparks reminiscences about an unsolved murder there in the 1970s and he decides to take a look at the case off his own bat. Meanwhile his former colleagues, DIs Siobhan Clarke and Malcolm Fox, are dealing with contemporary cases that appear to overlap with what Rebus has uncovered.

This book has all the things that readers love about Rebus. A complex, tangled plot, great characters, strong dialogue and prose that is infused with the atmosphere of Edinburgh. The novel takes in gangland, money laundering, and Seventies rock stars, so Rebus is in his element. I read this quickly and couldn’t wait to get through it.

My one reservation is that Rankin, who has always been such a stickler for realism, seems to have thrown it out the window in order to shoehorn Rebus into a contemporary investigation. Clarke and Fox, despite both being well-regarded high fliers, are apparently unable to manage without his unique skillset (which as far as I can tell consists of esoteric knowledge of folk rock and being rude to people). When Rebus starts laying down the law to a senior officer on a murder investigation, we’re supposed to side with Rebus but my sympathies are all on the other side.

I also think the fictional Police Scotland needs urgent investigation by the fictional Scottish Information Commissioner. Officers check out random files on a whim and take them home (or rather give them to Rebus). People share passwords with co-workers who then give them out to casual acquaintances. Retired officers wander in and out of police stations at will. All to keep the plot on the road.

Of course true Rebus fans won’t care about any of that, they’ll just be glad to see him back. As was I. I’m not as familiar with Clarke and Fox but neither of them felt to me to have the presence to be the lead character in a book (whether you like him or not, and I’m not sure I do, Rebus is never dull). I don’t know if that’s my problem or Rankin’s.

This story begins with Rebus re-evaluating his life in the light of worsening health. It will be interesting to see if he comes back in another book. I would like to read more about him, but maybe next time he can have a consultant’s contract and a doorpass.

I received a copy of this book from the publisher via Netgalley.