Shortly before the US election in 2016, when people were still considering what a woman president might mean for the world, Michael Moore posted this tweet

No women ever invented an atomic bomb, built a smoke stack, initiated a Holocaust, melted the polar ice caps or organized a school shooting.

leading to a comprehensive debunking in this thread by Jessica Ellis

Well… this is spectacularly not true https://t.co/f23ZDTrJFr

So reading The Power felt timely. It asks, what would happen if women gained a physical advantage over men? Would the world be transformed into a nurturing, empathetic utopia? Or do women and men who get power inevitably exploit it?

The novel is framed as the manuscript of a (subservient) male academic called Neil, writing five thousand years in the future, which he has sent to ‘Naomi’ for review. He is trying to make sense of events that occurred in our present.

The story begins when adolescent girls suddenly develop the power to deliver electric shocks. They can also awaken a latent power in some adult women. This causes dramatic social change, told through the stories of three female and one male characters. Roxy is a teenager from an East End gangster family, Ally, an American of around the same age who is running from abusive carers, Margot an ambitious US governor and single parent and Tunde, an ambitious freelance journalist from Nigeria.

What’s interesting is that not all girls and women have the same power. Some have greater electrical capacity, and some are better able to control and use what they have. But there are also those who have the vision to see how the world is changing and how to use existing structures to exploit it. Immediately power begins to shift. 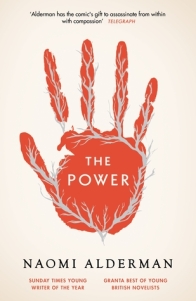 Women in countries from Saudi Arabia to India rise up. The three female characters all see opportunities – Roxy in organised crime, Ally by starting the religious cult of Mother Eve and Margot by organising a public-private paramilitary organisation. Tunde travels the world documenting change and finds both allies and danger among the women he meets.

The first part of the book also takes a nuanced approach to what the power might mean. At times the power is turned against women. They are barred from certain posts if they have it. There is talk of restrictions and cures. Teenage girls turn on each other. But as their power becomes more entrenched and men begin to encounter the limitations that some women do now (like not leaving home without the permission of a female guardian) it highlights to the reader how wrong and bizarre they are.

As The Power went on though, I found my attention wandering and I struggled to finish it. There are a couple of reasons. The plot loses its way and the ending is a bit of a cop-out. There’s a certain amount of exposition. But the key problem is in the narration.

When I think of the dystopian novels I’ve enjoyed the most (eg 1984, The Handmaid’s Tale) they show the workings of a society through the perspective of one character. You gain a rich, immersive sense of the fear and the humiliation and the tedium they face every day. Here we have a kind of helicopter view. The four main characters and those around them just aren’t that interesting as individuals and their stories overlap in ways that aren’t always convincing.

They are all in positions of power and influence in some way, perhaps because those are the stories that would survive. They are all single at the start of the book so we don’t see how the changes affect long-term relationships and the institutions of marriage and the family (key areas for feminists). We also don’t have much sense of what happens to women and girls who have the physical power but no social or economic capital to exploit.

The Power ends with Naomi commenting on Neil’s manuscript, in particular being mildly dismissive of his assertion that men once dominated society, because there is little evidence of it in the historical record. Neil insists that is because those who have power decide what is history. This shows both the strength and weakness of the book to me. It’s a nice reversal and makes its point, but the point is quite an obvious one.

I received a copy of The Power from the publisher via Netgalley.
View The Power on Goodreads

Like dystopian fiction? Take a look at my review of Suicide Club by Rachel Heng