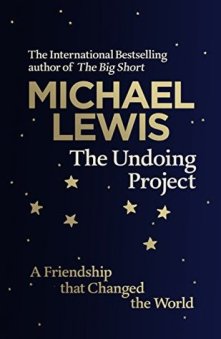 I’ve read quite a few books on popular psychology and behavioural economics so I expected to skim a bit but I was gripped by The Undoing Project from start to finish.

It tells the story of the collaboration between Daniel Kahneman and Amos Tversky, two gifted academic psychologists who have changed the way we think about rationality and decision making. It combines the biographies of the two men, a discussion of their key ideas and vignettes of other people who have been influenced by them or applied their thinking to fields ranging from sport and medicine.

Lewis contrasts their backgrounds. Kahneman grew up in constant danger in Nazi-occupied France, while Tversky was born into a pioneering and politically active family in British Palestine (later Israel). He describes their fierce intellects and contrasting temperaments – the reserved, anxious Kahneman and the charismatic, risk-taking Tversky.

The book gives you a strong sense of Israel during the early years of the state and their commitment to the country. When the Yom Kippur war breaks out and the two men are in California, they immediately head home to return to the army and active duty.

Lewis explains their ideas in a comprehensive and clear way. Their most famous work, for which Kahneman went on to win the Nobel Prize for Economics, was their debunking of the rational actor (or ‘man’) at the heart of classical economics. We all rely on heuristics (rules of thumb or gut responses) and most of the time that works well enough. But Kahneman and Tversky identified situations where these stop us making rational decisions, particularly those involving complex or statistical information. They demonstrated their ideas by using pleasingly everyday case studies, and found that even statisticians were fooled by them.

The Undoing Project is intriguing on the relationship between Kahneman and Tversky. It gives you insights into their friendship but there is a sense that their closeness was a mystery to even their closest friends and this for me is what drives the story.

Kahneman and Tversky agreed to be interviewed by Miles Shore, a psychiatrist who was studying the working methods of ‘fertile pairs’. He found that successful professional pairings are almost like happy romantic couples. They finish each other’s sentences, their intimacy leads them to exclude others, and crucially, there is a sense that their work is the result of their combined effort. They are unable to attribute the different elements to one member of the pair, their ideas arise organically from their collaboration.

Sadly, like a romantic couple, their relationship had periods of jealousy and professional rivalry and as the title suggests, estrangement.

Michael Lewis combines a serious treatment of their work with a moving human story. I actually felt bereft when I finished this book.

Enjoyed this? Check out Against the Rules, the new podcast from Michael Lewis