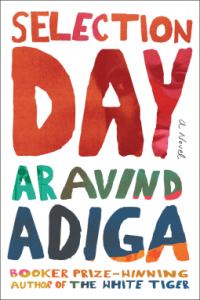 Selection Day is the story of Radha and Manju, two boys who are being moulded for cricket stardom by their father. He has brought them from his village to the slums of Mumbai to give them the opportunity. He is controlling, eccentric and ruthlessly determined. The boys, as children, have no choice but to do what he wants.

Although the story follows both brothers, it mainly focuses on the younger, Manju. Manju is a talented cricketer but he really wants to be a scientist. His father is so convinced that both he and Radha will succeed that he wants him to give up his education. Then Manju notices Javed, a handsome, privileged and determinedly unconventional cricketer who is also their rival. Manju’s attraction to Javed further confuses his sense of what he wants and what is right.

I found Selection Day a little slow going at first. I thought it was just another coming-of-age story. But as the boys grow older, and the decisive day approaches, it becomes about much more.

The talent scout and coach Tommy Sir is a historian of cricket, but also a man of wide-ranging interests, from military history to geology. He sees the changes in cricket representing a shift in his country’s values. He laments the power of money and fame.

Javed’s affluence means he is free to rebel in ways which Radha and Manju are not. Their father takes on a sponsorship arrangement which leaves them in virtually slavery, prey to corruption. But each brother attempts to assert himself in a different way, and much of the story is about how they respond to the increasing pressures placed upon them.

Selection Day is a vivid portrait of Mumbai, cricket, obsession and ambition. It is about belonging and competing and the cost of both.