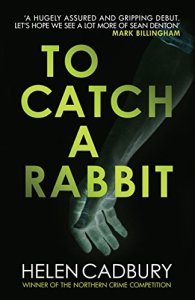 By sad coincidence, I only discovered Helen Cadbury last week. I loved To Catch a Rabbit and as soon as I finished it I went online to see what else she had written. I learnt that she had died just a few days earlier aged 52.

To Catch a Rabbit is the first in a crime series featuring Sean Denton. Sean is a police community support officer (PCSO) in Doncaster. Two boys lead him to a woman’s body in a caravan. She appears to have been a prostitute, possibly trafficked. The officer in charge seems to want the investigation shut down, but Sean is determined to find out more about her life and how she died.

Meanwhile, Karen Friedman lives in an affluent home but an unhappy marriage in York. She finds sanctuary in her work for a refugee charity. However the disappearance of her brother throws her into confusion and grief.

It is so refreshing to see a working-class character at the centre of a novel. Crime fiction may do better than other genres, but even then they are more likely to be committing the crime than solving it. Sean Denton is not a high flier. He doesn’t drive an eccentric car (or any car at all). He struggles financially and has a complex family background. However, he is observant and focused and able to empathise with people in his community. He has a strong sense of his own beliefs and identity.

It is also good to see a realistic depiction of police work which focuses on the civilians and lower ranks. Just as the woman in the caravan is marginalised, so are many of the police workforce. You get a real sense of the palace intrigue within the force, distinctions of class, hierarchy and power, as well as camaraderie and humour. There is a large cast of characters but they are so vivid that I had no trouble keeping track of them.

Karen’s world is very different but equally sharply observed. Karen goes through a range of emotions in both her personal and work life and her dilemmas feel very real. The two stories are skilfully woven together, criss-crossing the contrasting landscapes of contemporary Yorkshire.

To Catch a Rabbit is a crime novel but it is also a book about big issues, told through unforgettable characters.
*
I listened to the audio version of To Catch a Rabbit. The excellent narration by Jonathan Keeble meant I was immediately immersed in the story.

View To Catch a Rabbit on Goodreads