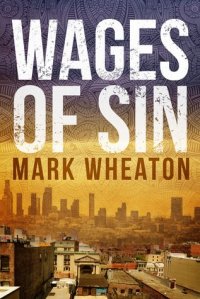 I’ve read the Father Luis Chavez series in order. What I enjoyed about the first two books was their strong characters and pacy plots and the way they immerse you in a world – the first, Mexican migrant labourers, and the second Triad gangs, as well as exploring the Los Angeles of Luis Chavez and his complicated relationships with his God and his past.

Luis Chavez was a gang member before he changed his life and became a priest, and still maintains a close friendship with his childhood friend Oscar de Icaza, who is involved in that world. A crime in the first novel brings him into contact with Deputy District Attorney Michael Storey, and despite conflicting aims and values they work together to solve a crime, a relationship that continues, with a certain degree of implausibility, throughout the series.

Wages of Sin is the third in the series. It begins promisingly with a life-changing event for Michael Storey and the discovery of a money-laundering conspiracy. There is also a possible connection to the death of Luis’ brother several years ago. Oscar is expanding his criminal empire. Meanwhile Luis is having a crisis of faith. These connected events soon mushroom into a massive plot which draws in all the key characters in the series, plus a significant number of new ones, with action taking place across continents.

In the earlier books we become immersed in the stories of the different characters and their worlds. In this one, there are so many people that I found it hard to stay involved. New characters whose stories were set up at the beginning were forgotten in all the rushing between locations. Luis’ questioning of his religion didn’t get the treatment I thought it deserved.

In the other books in the series the conflict comes in part from within the characters. Each time they struggle to escape their constraints, they are bound ever tighter by their irreconcilable desires and loyalties. Here it was much more on the outside. It’s as if he took Chandler’s wry observation on writing pulp fiction, “When in doubt have a man come through a door with a gun in his hand”, for advice. It feels like the interesting relationships built up in the earlier books were squandered as each of the main characters acted largely in isolation. And I’m afraid I saw the big twist at the end coming a mile off.

Luis Chavez is an interesting character and the books offer a fresh take on the amateur detective. They are best read in order as the series characters change during the development (and the later books include rather a lot of spoilers). If you’ve enjoyed the first two you’ll probably want to read this one too, but I feel a bit sad that the author hasn’t done his characters justice.

For a more nuanced take on a priest struggling with his faith, try Conclave by Robert Harris