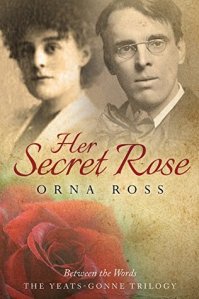 Her Secret Rose is the first in a trilogy based on the lives of the poet WB Yeats and actor-turned-political campaigner Maud Gonne.

From their first meeting they are united by their passionate commitment to Irish nationalism, but there is much that divides them. Gonne is independently wealthy, worldly and confident. She has the resources – bolstered by an unconventional upbringing – to break through many of the constraints facing women at the time.

Yeats, by contrast, is naïve and sexually inexperienced, living at home in genteel poverty and struggling to make a name for himself. He becomes infatuated with Gonne and she looms large in his thoughts and fantasies even though they rarely see each other. She, in turn, seems to need his friendship, though it is never entirely clear, perhaps even to Gonne herself, whether she feels a profound connection to him or whether he is just another plate she has to keep spinning.

The story is narrated by Rosie Cross, a woman who reveals little of herself in this first volume, except to say that she was also involved in nationalist movement and was a servant at that time. This frame works well – Rosie is close enough to know their thoughts and feelings but also has a nice ironic distance. She is clearly not blind to the faults of her subjects.

Yeats, like his artist father, is concerned that his art should not be tainted by banal concerns such as earning a living. The burden of supporting the household therefore falls on his long-suffering sisters.

Gonne is portrayed as a more complex and enigmatic character. For all her strength and charm, she is embroiled in an abusive relationship with a married man in France who is happy to use her to further his own political agenda.

Gonne elects to keep her private life a secret. She is constantly aware of her public persona and its importance to her political activity. She tells Yeats – and presumably the world at large – that her children are orphans she has adopted. His lack of knowledge of her real life allows him to mythologise her further.

Their vision for Ireland draws on Celtic myth and mysticism which can put them at odds with other nationalists (Gonne is conflicted about whether to share a platform with a socialist, and at times people criticise her interventions in the evictions of tenant farmers as more theatrical than constructive).

The story is interwoven with extracts from original documents and Yeats’ poetry. It portrays two fascinating but not necessarily attractive characters, and gives an insight into an important period in Irish history.