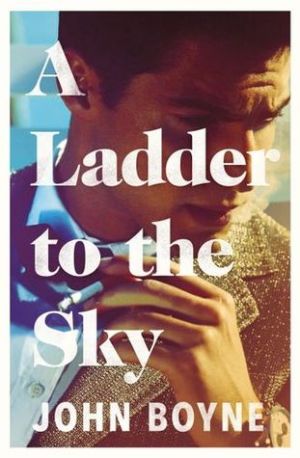 After loving The Heart’s Invisible Furies, I was looking forward to reading John Boyne’s latest novel.

A Ladder to the Sky is the story of an attractive young man, Maurice, who wants to be a writer. He uses his looks and charm to attach himself to a series of successful authors across the world. He builds his own career as a novelist by stealing stories from them, while leaving a trail of destruction in his wake.

Boyne is having fun with the well-worn question, ‘Where do you get your ideas from?’ and wondering what would happen to an author who could write good prose but couldn’t invent a story of his own. I’m not sure I accept the premise – I’ve read plenty of literary novels where the prose is gorgeous but the story weak and unrealised and that doesn’t seem to stop them winning awards. But it’s a fun idea and a playful treatment.

I loved the black comedy and Maurice’s trajectory through literary circles. It’s a world that’s familiar to me from the days when I was on the fringes of traditional publishing, albeit at a lower level. I think the constant hustling, the fine line between adoration and envy, the comparisonitis are due to the fact that the conventional markers of success – salary, job title, professional qualifications – are absent so your status is always shifting. The intriguing question is why Maurice, with his good looks and easy opportunism, doesn’t inveigle himself into a more glamorous and lucrative business.

Perhaps the same things that make people want to write and be among writers – the love of the craft, the desire to belong to a world of books and ideas – apply to him too. It suggests that his passion for literature is genuine, even if the rest of him is a lie.

A few real writers make an appearance in the novel which is fun and adds to the writerly in-jokiness of the thing. There is an interlude written from the point of view of Gore Vidal which is quite entertaining if you’re a fan, and works by Maude Avery, the fictional novelist from The Heart’s Invisible Furies, are namechecked.

The irony, of course, is that Maurice is constantly inventing in life, with his trail of deceit and manipulation. But it seems Maurice can’t get to the end, and that’s true of this novel as well.

In the later part of the book we learn about key events from Maurice’s point of view. This only works if he has something to add, a radically different perspective, an intriguing justification. He doesn’t. Boyne also has an annoying tic of writing dialogue scenes as if they were verbatim, which means he often repeats at length stories the reader has already read. Why he can’t just write ‘I told him about the death of my mother’ and move on, I don’t know.

Maurice was most interesting when seen through the eyes of others, when he had the dark allure of a cool, calculating psychopath. When you start learning what he thinks himself, it’s quite banal. Perhaps that’s the intention, he is, after all, a man who can’t make up a story, but that and a slightly laboured twist meant that, for me, the end of the book didn’t live up to the rest.

Take a look at my review of The Heart’s Invisible Furies – which I loved!