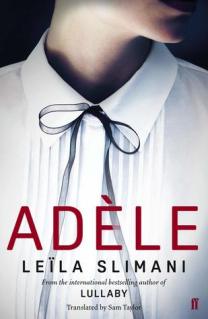 Adèle is a woman living an apparently privileged life in Paris, working as a journalist, married to a surgeon. But she feels a deep sense of emptiness which she expresses through sexual addiction. This leads her to incessantly, obsessively, lie, let people down and place herself in danger.

The premise is fascinating and the voice is sharp and stylish. We follow Adèle’s relentless rumination, the way she harms those who care about her, the recklessness, the feverish highs, the sense of emptiness.

Sex for Adèle is bleak and deeply unerotic, in fact disgust for her casual partners is almost a prerequisite. As soon as she has what she craves, she no longer wants it. She longs to feel safe and cared for, but constantly takes risks.

However I thought ultimately the book was disappointing and has an unfinished feel. Strands of the story were set up but never followed through. Elements of the plot, such as it is, felt unconvincing or introduced purely to shock.

I didn’t expect a pat explanation or a neat resolution, but I wanted to feel that something in the character or the author or me had shifted. Instead I was left bemused.

I received a copy of Adèle from the publisher via Netgalley.
View Adèle on Goodreads