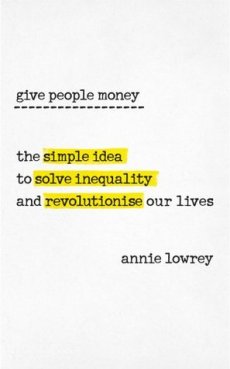 The idea of paying a basic income to all citizens, regardless of income or employment status, has attracted a lot of attention recently worldwide. It is seen as one solution to the problem of automation.

It appeals to progressives because it does away with the stigma of welfare benefits and means people can work flexibly or take on caring responsibilities without fear of destitution.

It has also attracted interest on the right because it would do away with the bureaucracy inherent in piecemeal provision of welfare, and provide consumers with income which in turn generates spending and profits for business.

Give People Money is a comprehensive and in-depth look at basic income. The author has looked at schemes around the world and while sympathetic, is frank about some of the difficulties.

In Kenya, she sees how an NGO called Give Directly does just that. It pays everyone in a  particular village a basic income for twelve years. This security allowed people to buy equipment to start small businesses and improve their living conditions, and meant children could stay longer in education. Most people did not waste the money but made sustainable changes to their lives.

She contrasts this with aid projects which give people what they think they need, meaning they receive items which often go unused, or have complex and bureaucratic ways of assessing entitlement, which divide communities when some people are deemed eligible and their neighbours are not.

She discusses issues around automation and flexible working. A basic income would give people the freedom to work fewer hours, do more fulfilling work, or develop other interests. It might also mean that people at the bottom would be paid more. At present many unpleasant jobs with unsocial hours are low paid because the people who do them have no choice. With the floor of a basic income, employers might have to pay more to get people to do them.

She contrasts this with the current difficulties of accessing welfare benefits in the US in particular, and the problems of getting into work when it might mean an unpredictable income and the loss of the little amount of money you are receiving (further complicated in the US by the issue of healthcare coverage).

Although its scope is global, Give People Money is written from a US perspective and one thing that she doesn’t address is whether the basic income model should incorporate additional payments for disabled people and for parents of young children. In the UK such benefits are largely paid in recognition of the additional costs of being disabled, or bringing up children, and are not means tested. 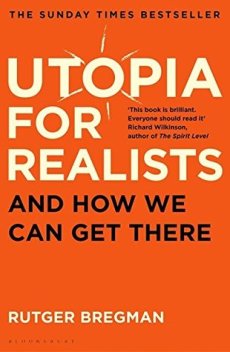 One element of her argument that I found disheartening is that universal benefits or schemes that resemble basic income have been most effectively applied in homogeneous communities (she cites Switzerland and the Scandinavian countries). She believes that it might face greater resistance in a divided society such as the US. She points out that entitlement in the US is often linked to the notion of the ‘deserving poor’, and that many benefits are delivered at state level. She argues that the legislation was framed this way specifically so that southern states could exclude black people from entitlement.

Utopia for Realists is a much more general and wide-ranging book. The author’s premise is that humanity has made great progress, that most of us have a standard of living that was unimaginable even two hundred years ago. Ideas that were utopian then, are part of our lives now, so why can’t today’s utopian ideas become tomorrow’s normal?

He makes the case for basic income while critiquing growth and GDP and discussing automation and the paradoxical proliferation of bullshit jobs. This book doesn’t get into the weeds like Give People Money, and it doesn’t consider the possible pitfalls of basic income.

What’s refreshing about Utopia for Realists is that it is upbeat. It’s a book that makes you feel positive and energised about the future, that sees the problems we have as opportunities. It’s understandable that people in green/left/anti-capitalist movements feel pessimistic, but perhaps we need this kind of optimism and vision to win people round.

Give People Money is more useful for people who want to think in detail about the social and policy implications of basic income, but if you’re coming to this subject for the first time, or need an overview (or just a bit of a lift), Utopia for Realists is a good place to start.

Want to learn more? It got a little lost in the Brexit madness but the New Economics Foundation and Compass have both recently published proposals for a universal basic income in the UK, an idea which has the support of, among others, Green MP Caroline Lucas and Shadow Chancellor John McDonnell.