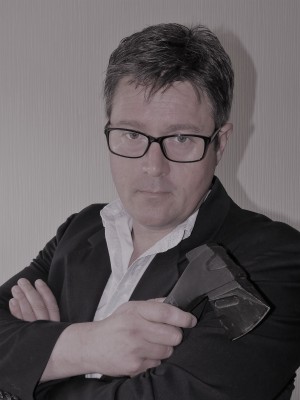 The thing that I look for in a novel above everything is a distinctive voice. Shaun Baines’ writing drew me in from the first page which I why I was keen to talk to him about his gangster noir series featuring Daniel Dayton.

What’s the story behind your latest novel, Pallbearer?

Although it’s a separate story, Pallbearer follows neatly from my first book Woodcutter. In Woodcutter, Daniel Dayton is on the run from his criminal family. When his daughter is harmed, he is drawn back to Newcastle to find the person responsible.

In Pallbearer, Daniel has reluctantly taken control of the family and is forced into a war with an old enemy, who are intent on flooding the streets with a new designer drug. Daniel is determined not to follow in his father’s footsteps while his own daughter is showing signs of following his.

When I first started writing, I thought I was writing about gangsters. It took a while for me to realise I was writing about families. Gangster noir is the perfect vehicle to explore themes of family dynamics. The Mafia base their ideology on familial virtues, despite how damaging their actions are to the victim’s loved ones.

I didn’t want to idealise gangster culture, which is where most of the grit and darkness comes from. I add humour to lighten the narrative, but there’s no escaping how raw I go.

When I was six or seven, I almost got drawn into the company of two brothers who were clearly on the path to crime. They were the same age as me and I don’t think I’m insulting them by calling them natural born psychopaths. I told my mam they’d invited me to their house to set light to their sofa. Like a good northern mother should, she beat me for even for considering it.

I’ve recently learned those brothers have been imprisoned for cutting off someone’s ears. Mams are always right and that’s why I write about families as much as I write about gangsters. 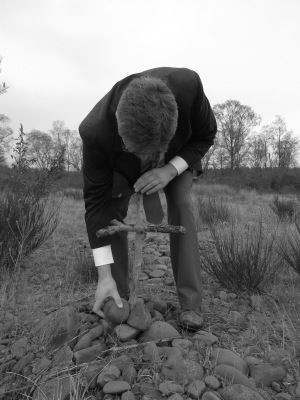 You once said that you almost killed off your protagonist, Daniel Dayton, in Woodcutter. Did you originally see it as a standalone? What are the pleasures and challenges of writing a series?

The one rule I have when writing the Dayton books is that anyone can die. Guilty. Innocent. Bad. Good. Death in the criminal underworld is indiscriminate and I wanted to reflect that in my writing. No-one is safe and that applies to the main characters. However, when I applied that principle to Woodcutter the publisher told me I was nuts. And quite rightly.

BIG REVEAL: When Daniel died, his body was never discovered. He was supposed to be found by an old enemy and nursed back to health in order to exact revenge on someone or something. You know, one of those dead, but not really dead type of things.

I always thought of the Daytons as a series. There’s so much to be explored. While each book is a story in itself, there is an overriding arc regarding Daniel’s origins. With every book a little more is revealed. At some point, I’ll sense the readers’ frustration at being led by the nose (I won’t. I’ll read it on Twitter, followed by death threats) and then that will be the end of the series. The last book will reveal all.

As a reader myself, nothing beats discovering a book and then finding there are twelve more like it. That’s what I’m hoping to achieve with the Daytons.

The challenge is remembering all you’ve written before. Does Daniel have oval eyes or sad eyes? How old is Bronson? What colour is their front door? It’s technical stuff, but it matters. I see my characters clearly. I know how they’ll respond to any given situation, but the details get hazy. I know Bronson will take a beating if his reputation is at stake, but I don’t know how big his feet are. 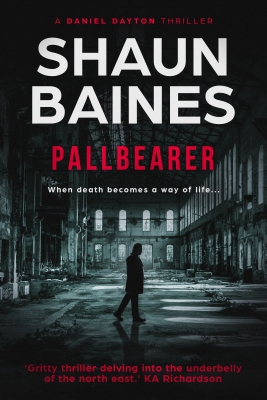 You live in rural Scotland, and grow your own fruit and veg. It sounds like an idyllic life for a writer. What’s it like in practice? Is there anything you miss about city life?

Like writing, the good life isn’t always as good as it appears on paper, but I do love it. I live in the kind of isolated place where passing traffic is a talking point. My nearest neighbours are cows and sheep.

When we first moved in, my wife and I were watching X Factor one night (I’m not proud of it, but we were desperate) when a cow pushed its face against our sitting room window. Being an over-imaginative writer, I assumed it was there to kill us and I sent out my wife to deal with the problem. I was too busy criticising someone’s song choice to do it myself, you understand.

Having enough space to grow my own vegetables is a dream come true. And yes, they do taste better when you grow them yourself. I’m aiming to be self-sufficient and with the calamity of Brexit looming, I might have to be. The ultimate goal is to write in the morning and grow vegetables in the afternoon. I also brew my own wine, so I’ve got getting drunk covered. As soon as I learn how to grow washing-up liquid, I’ll never have to visit a supermarket again.

Which is just as well because the nearest shop is twelve miles away. That’s one of the drawbacks of a rural community. Shops, tradespeople, doctors. It’s a struggle to get to them. My dear wife has a tusk growing from her forehead and the specialist is too far away to grind it down.

That said, I don’t miss the city life. I used to live in South Shields in the north-east of England. It is a coastal town and I miss the smell of the sea. Not the temperature, though. I once did a Boxing Day dip for charity where I dressed as a teddy bear and threw myself into the water at the height of winter. I won’t go into details, but everything shrunk, including my dignity when I screamed like a little girl.

What do you enjoy reading? Tell us about

The Rats by James Herbert. It was the first horror I ever read and I’m on record as saying this book gave me a lifelong fear of rodents, despite once having two charming rats as pets. I was far too young to become a Herbert fan, but my local library were lax when it came to age limits. I loved them all. (The books, not the librarians, though Ms Kingston often made my trousers go all funny.)

Herbert was never accepted by the literary elite. He was working class and writing in a genre no-one rated. It rankled him because he was an exceptional writer who deserved more recognition from the higher-ups.

I’ve just started a book review blog on my site and I’m constantly amazed by the talent I read. I recently read The Girl on the Bus by NW Brown. His opening chapter is one of the most chilling I’ve ever read. Open Grave by AM Peacock is set in my hometown so I’m biased, but the narrative and language was so brilliantly accessible, you almost slide into the story without realising it.

I’m a huge fan/stalker of John Connolly, Mark Billingham and the queen of crime – Val McDermid.

They’re bestselling authors, but with self-publishing and independent publishers bringing us so many good books, we’re blessed with an array of great writing. It’s a golden age for literature.

(Now that I come to think of it, my books are much better than that dirge. Read mine instead.)

My best (and only) friend has written a fantasy novel called The Small Hours. I was lucky enough to be consulted as a beta reader and I would love to see it published. Obviously, I wouldn’t buy it. I’d expect a copy for free, but it would be nice to see it come to fruition.

What are you working on now?

I’m currently writing the next Dayton book, which I’m loving. It’s like spending time with old friends; violent, temperamental friends, but people I’m comfortable with. I also have the first draft of a cosy mystery to revisit. It’s a change of pace and I’ve had to discover a new way of writing. I’m hoping it will be serviceable by the end of the year.

And I have a collection of short stories I’m desperate to self-publish. Most of them have been published in magazines, but I’d like to bring them together under one cover. I’ll be adding a few original stories as soon as I have the time to write them.

After all of that, I’ll probably be working my way through a bottle of wine.

Shaun Baines is a crime writer from South Shields. His debut novel Woodcutter was published by Thistle Publishing and is currently nominated for the People’s Book Prize. His sequel Pallbearer has recently been published by Sharpe Books. When he is not writing, he adopts ex-battery hens (and encourages everyone to do so), he keeps bees and grows his own vegetables. He lives with his wife in a cottage in Scotland and has a love/hate relationship with his petulant dog, Bella.