For me, post-apocalyptic fiction asks us not just how we would survive, but what would happen to our sense of self when the world that gave us status and identity is swept away. So I’m  intrigued to hear from Amy Ginsburg about the transition from suburban comfort to chaos in her dystopian novel The After Days.

I wrote The After Days because I was tired (oh so tired) of reading dystopian tales where the protagonist was an outcast teenager or a male with superhuman powers. Where were all the ordinary suburbanites, doing their best in impossible situations?

I love dystopian fiction of all kinds, but for too long, post-apocalyptic futures were viewed mostly though the eyes of teens and men. Only recently have books like Red Clocks, Vox, Station 11, and The Power considered dystopia through the perspective of women. And when they did focus on women, it was the rare story that included middle-aged protagonists. Wanting the women I know and admire, the women so often left out of science fiction, to be the center of a dystopian story, I wrote The After Days so that we can inhabit the mind of Rachel Caplan, a fifty-four-year old nonprofit executive.

I was also disheartened by the propensity of most dystopian novels to start years or even decades after the precipitating event, whether that’s climate change, asteroids, epidemics, or puritanism. What happens the day of the event? The month after the event? How does a thriving, ordinary world degrade into dystopia? At what point does uncertainty become chaos and hardship become apocalypse? Who thrives and who gives up? What’s the proportion of luck and skill as the fates decide who survives? 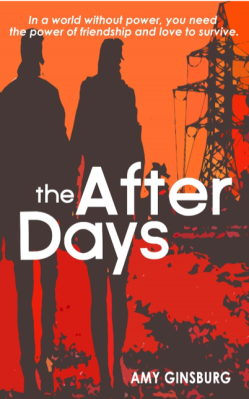 As a “pantser,” someone who writes by the seat of her pants, following the characters where they take her, I was shocked by how quickly the suburbs – those traditional havens of safety and security – devolved into a dangerous arena. Much faster than I would have predicted, suburbia falls under the control of the ruthless and the armed.

At first, Rachel Caplan, Zach Wu, and their friends Julie and Christopher Davis believe the power outage is a temporary interruption to their lives, much like a blizzard. It’s a time for neighborhood barbecues, the tantalizing smell of meat sizzling on the grill before it spoils in their non-working freezers. It is a time of bonus vacation days and minor complaints about the inability to watch TV. But as time creeps forward and the electricity doesn’t return, they realize their community are forever changed. Are these four suburbanites able to adapt to survive until the power … hopefully … returns?

Spanning multiple genres – women’s fiction, science fiction, and dystopia – The After Days will spawn fascinating discussions at book clubs … and perhaps encourage readers to pick up an extra can of peaches the next time they go grocery shopping.

As a writer, I love to explore dystopian events through the perspective of ordinary people. I’m dedicated to giving my readers terrifyingly real, astonishingly tender, gripping stories that combine book club and dystopian fiction.

After graduating from Syracuse University with a B.A. in Public Relations and Psychology and backpacking around the globe, I earned a master’s degree from the University of Maryland while working and raising two amazing kids. Recently, I participated in the Algonkian Writer Retreat and Novel Workshop.

In my day job, I own a consulting firm, The AG Group, helping nonprofits and businesses use communication and marketing to showcase what makes them extraordinary. I have more than three decades of experience leading, marketing, and raising funds for nonprofit organizations.

When I’m not obsessing over The After Days, I golf, bake, swing dance, spoil my granddaughter, think about working out, and read. Splitting my time between North Bethesda, MD and Bethany Beach, DE, I love laughing with my friends and family, all of whom have been incredibly supportive of my writing.

About The After Days

The After Days is a riveting novel about a suburban woman who must find within herself the strength and ingenuity to endure a world suddenly without electricity, a world growing more chaotic and dangerous with each passing day.

Middle-aged suburbanites Rachel and Zach team with their friends to battle not only the predators and scavengers who lurk around every corner of an upscale Maryland suburb but also empty pantries, boredom, and despair. Turning to one another … and sometimes on another … four friends discover their post-graduate degrees and professional skills are wholly inadequate in a Montgomery County crashing into bedlam.

How far are they willing to go to survive the Big Blackout?

Perfect for book clubs, The After Days is a gripping contemporary dystopian story that is both terrifyingly real and astonishingly tender. The After Days explores the ethical quandaries and logistical problems of ordinary suburbanites – people whose most recent problems were dodgy Wi-Fi and cranky bosses – in their struggle to survive in extraordinary circumstances.