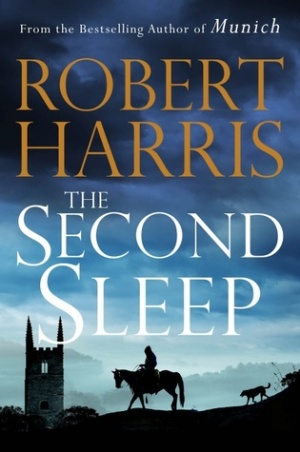 I take some trouble to avoid major plot spoilers in my reviews, but in this one I’m having to avoid giving away the premise, which is tricky. It’s the year 1468 and a priest named Christopher Fairfax travels on horseback from Exeter Cathedral to a remote Exmoor village. The parish priest there, Father Lacey, has just died and he is to oversee the arrangements.

Fairfax becomes intrigued by the manner of Lacey’s death — and by the lady of the manor, the widowed Lady Durston. He learns that Lacey had a fascination for excavating relics of the past, and for reading heretical texts. He becomes drawn into the mystery of how and why Lacey died. He knows this could place him at odds with the teachings of the church, but still he begins to conspire with Lady Durston and others who he believes are sympathetic.

However, all is not quite as it seems in this village. There are odd anomalies. At first you wonder if the copy editor briefly dozed off, but then you understand what Harris is doing.

Harris has form for playing with our assumptions, from the counterfactual Fatherland, which imagines a post-war UK where Hitler won the war, to this much misunderstood satirical tweet

Typical remoaning. Did we need Honda component parts at Agincourt or Crecy? https://t.co/d7prkH7OfE

There are some thought-provoking ideas in The Second Sleep. For me, though, the story doesn’t have the thrills or the pace you normally expect from Harris. Perhaps this is because of the setting. There is a nice twist in the end but you have to travel at the pace of a horse to get there.

If you like my reviews, why not try my novels? Still You Sleep is published on 18 February.