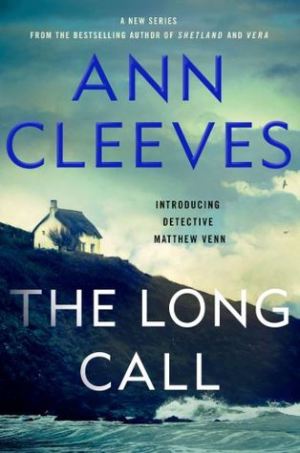 Ann Cleeves’ Shetland novels are my new favourite comfort read. I like the way she focuses on deep characterisation and ordinary people in a close community, flying in the face of the fashion for high-concept thrillers – ‘Would you kidnap your amnesiac grandmother to save your cherubic but treacherous best friend’s sister?’

I was also excited about The Long Call because Cleeves is known for the strong sense of place in her work and this is set in North Devon, where I grew up.

Detective Inspector Matthew Venn has moved back to Devon to live with his husband, Jonathan. The story begins with Matthew standing outside the funeral of his father, feeling unable to go in. He is estranged from his family because they are devout members of the Barum Brethren and he lost his faith some years earlier.

Then the body of a man is discovered on the estuary, close to Matthew’s home. He has been stabbed and has no identification on him. As Matthew pursues the investigation he finds the case has links to both his own past and his husband’s work at the Woodyard, an arts and community centre. The victim was a chef there. Then a young woman with Down’s Syndrome who also attended the Woodyard and was friendly with the victim disappears.

It’s a great set-up and the novel contains all of the classic ingredients of a Cleeves novel, but somehow they don’t gel. The writing is heavy on exposition and big chunks of back story, often introduced without context. The worst instance is close to the end at what should be a very tense and dramatic moment when one police officer bizarrely decides it’s a good time to discuss his relationship with his father and how it has informed his character and career choices. This from a man who has previously shown no signs of introspection.

The novel feels oddly out of time. Apart from the occasional mention of a mobile phone, and the fact that Matthew is married to a man, it could have been set at any time in the last four decades. It’s like when you flick through the channels and find yourself looking at an old detective series on Yesterday, where everyone has brown patterned wallpaper and their heads stretched wide to fit the screen.

There is very little mention of forensics. Basic checks, such as on the victim’s finances, aren’t carried out. Everyone insists on speaking face to face, even when the information they have is very trivial or very urgent. The detectives wander into emergencies and then realise they have no mobile coverage. It appears they haven’t heard of radio, databases, budgetary constraints or the Police and Criminal Evidence Act. Someone who isn’t your nan even sends a cheque through the post, for reasons that don’t make sense in real-world or narrative terms.

I also felt unconvinced by Matthew and Jonathan’s relationship. You don’t get a sense of any chemistry between them. Of course, happy relationships are always harder to write, but they seem more like a couple in a smoothie ad, with their picturesque cottage and long walks and artisan-potter friend.

There are some positives. The locations were nicely done and felt convincing. I don’t know the Barnstaple area well but Ilfracombe featured. I lived there as a child and occasionally go back and it felt like a realistic portrayal of the town. I did, despite my reservations, want to know how it ended, although one thing I’ve noticed is that in Cleeves novels often the detective guesses the murderer through an intuitive leap rather than evidence. The murderer then obliges with a lengthy confession when confronted, filling in the blanks.

This is an uneasy mix of a novel. The emphasis on character over realism gives it the feel of a cosy, but the plot brings in some pretty serious issues, the implications of which aren’t fully followed through. If you’re a Cleeves fan you’ll probably want to take a look at this, but if you’re new to her work I’d start with the Shetland novels.

Try instead — for a character-driven police procedural with more pace and realism, read my review of Stalker on the Fens by Joy Ellis