Fiction writers are often told to test their characters by making bad things happen to them. However good luck presents challenges too. Here Celeste León writes about how her father responded to a life-changing event and inspired her to write a novel based on his story.

“So … why do you want to write about me?” my then eighty-year-old father asked me over a dozen years ago when I began to interview him for a book.

Why indeed. My father’s humble response shows what kind of man he is.

His story morphed into my novel, Luck is Just the Beginning, published by Floricanto Press. It is inspired by the true story of his remarkable luck. My father won the lottery after a premonition. But what’s more remarkable is what happened after.

Ramón León was born in Puerto Rico in 1925. My grandmother lost her first eight babies shortly after birth. The infant mortality rate was unimaginable at the time; tragically, her babies died of dysentery, malaria, or pneumonia. My father was the 15th child and the seventh to survive. No one in his family except he and his sister (the only girl!) completed high school. They were poor but hardworking and owned a clothing and textile store in the village of Maunabo on the southeast corner of the island. My grandmother, Abuela Chepa, sewed clothing for villagers on special occasions, items such as a shirt or skirt selected from her dog-eared Sears Roebuck catalog. 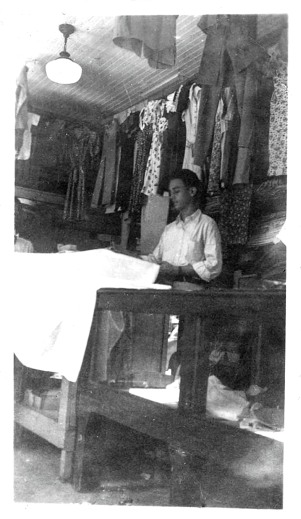 My father did alterations, too, but since a young boy, he had a dream to become a dentist after working with an old American man, a dentist whom everyone called “humanitario.” Yet the island had few dentists and no dental school at that time. His only chance to attend dental school in the mainland U.S. was to apply for a scholarship, but only five were awarded on the island annually, a tremendous long shot.

What followed was an even wilder long shot.

Ramón León had a vision: a series of numbers came to him. He and his friend, Guillermo, were talking of playing the lottery (Guillermo did, my dad was saving as much as he could for college), and a number came to my dad, all of a sudden. It’s not that far-fetched. Abuela Chepa, who earned the esteemed title of Doña Chepa, was a curandera, one who healed with herbs and the laying on of hands, villagers went to her for advice, cures for their ailments, even to tell their futures.

“Hey, Guillermo, I think I just saw the number to play in the lottery!” Dad shouted to his friend.

I can imagine the look of Guillermo’s face when he believed Dad would finally play. Guillermo teased him that he was finally loosening his purse strings, or probably used some epithet common in Spanish of that era.

Then — amazingly — the lottery salesman strolled into town with a ticket that had the number Dad saw in his head.  So, for the first time in his life, my father was so sure that a good fate would befall him that he bought not only a single ticket, which sold for a few cents, but the entire sheet of thirty tickets for $6.00. It was all the money he had saved since he was a boy of seven, selling pastries for a penny a piece to the macheteros, the men who wielded their machetes in the sugar cane fields. It was an enormous amount of money at the time in 1944, when most people made less than a dollar a day working in the cane or coffee fields.

And Ramón won the jackpot: $18,000. But it was a wild ride to use the money for the good of the community amongst all those who wanted to thwart his fortune. One review of the story states: Celeste Leon’s Luck is Just the Beginning is just the beginning for this author whose story about a lottery winner is a literary roller coaster.

This is the seventy-fifth anniversary of the day that changed his life. Ramón León won the lottery on November 22, 1944, the day before American Thanksgiving, el dia de Acción de Gracias, the day of giving thanks. A sweet irony.

My sisters and I grew up hearing my dad’s story, so to me, it’s part of my history, and it’s inspirational what he accomplished with his fortune.

He went to Michigan, speaking almost no English, and completed college and dental school. After a long career, when he finally retired, many of his patients cried.

It took me nearly ten years and hundreds of rewrites to complete my novel. During the long interview process, never once did my father say he was too tired or did not have time to answer my incessant questions. He shared the intimate details of his life with complete sincerity.

Luck is Just the Beginning has come to fruition. A beautiful tale. A dream come true for me, too.

Celeste León is an award-winning author. Her debut novel, Luck is Just the Beginning, was awarded Finalist (bio-epic) in the 2018 Latino Books into Movies Awards, a Mariposa award for best first book in the 2016 International Latino Book Awards, and Finalist in Multicultural Fiction in the 2106 International Book Awards. Celeste was named one of the “Top Ten New Latino Authors to Watch and Read” by LatinoStories.com and The Latina Book Club of New York. Her short stories have appeared in the Chicken Soup for the Soul Series and the Preservation Foundation. She is also the author of a children’s story, Ramón’s Lucky Toothache, about the recovery of Puerto Rico after Hurricane Maria. She lives in Truckee, California with her family where she is also a physiotherapist.

About Luck Is Just the Beginning

When nineteen-year-old Ramón León wins the Puerto Rican lottery in 1944, he believes his promise to establish the first dental and medical clinic in his village will be achievable. But an unexpected chain of catastrophic events intervenes.  Luck is Just the Beginning is not only an enchanting story of the joys and sorrows of family, but also the saga of one man’s determination to never give up on his dream.