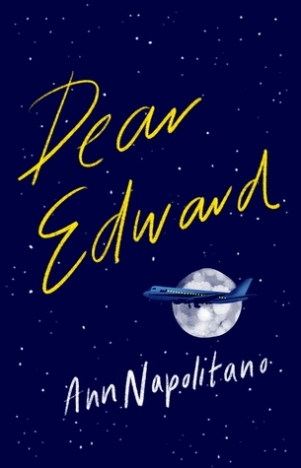 Twelve-year-old Edward Adler and his clever, unconventional, loving family are flying from Newark to Los Angeles to begin a new life when their plane crashes in Colorado. Edward is the only person on the plane to survive. Horribly injured and the object of international attention, Edward must find a way to deal with his pain and grief and move on.

Dear Edward has two timelines: one follows Edward after the crash, and the other a number of passengers, including the Adler family, from their arrival at the airport to the moment of their death.

I found the story of the plane and its passengers the more interesting of the two. There is, of course, the mystery of why the plane crashes, which is not revealed until near the end of the novel. Even without a crash though, the setting is inherently dramatic, people of different backgrounds confined in one small space, forced to rub up against each other (sometimes literally).

The people on the flight are all preoccupied with events in their lives, the turning points that led them to be on that particular plane at that particular time, and there is a poignancy to knowing that all their thoughts and hopes and fears will come to nothing.

The story of Edward in the aftermath of the crash is moving: the difficulty he faces being in the public eye, the shock for his aunt and uncle who suddenly find themselves caring for someone in great need at a time when they have issues of their own. However, the difficulty from a storytelling point of view is that the drama of the story is at the beginning. Recovery involves life becoming less about highs and lows, more about embracing the ordinary.

As the years move on, Edward tries to re-establish his sense of identity and find his purpose. The story can veer towards the saccharine at times. Edward is surrounded by a series of benign figures who are all, in different ways, trying to help him, and aside from one hiccup in his relationship with his closest friend, Shay, they seem unstinting in their desire to heal Edward and to negate their own desires.

It’s as if they have obediently accepted their role in life as secondary characters, though to be fair, this may in part be because the story is told from Edward’s point of view. (Shay does chide him at one point for his lack of interest in other people’s problems.)

I also felt that the purpose Edward stumbles on was a little unconvincing and out of step with the themes of the story. It takes his grief and makes something uplifting of it, but I think a bit more grit and ambiguity would have made for a more convincing ending.

There are moments of great emotion, beautifully written. You understand the terrible sense of loss Edward feels, the helplessness of the adults around him, the sense of being alienated from his own body and his own life. The narrative also subtly echoes Edward’s past life in the present, both in what is there and what is lost. For me, though, it is those other stories, of the people who died, whose conflict never had a resolution, which are more moving.

I received a copy of Dear Edward from the publisher via Netgalley.
View Dear Edward on Goodreads

Enjoyed this? This book shares some themes with Ask Again, Yes by Mary Beth Keane (though I think this is the better book).