If you don’t want to know how this book ends, look away now … 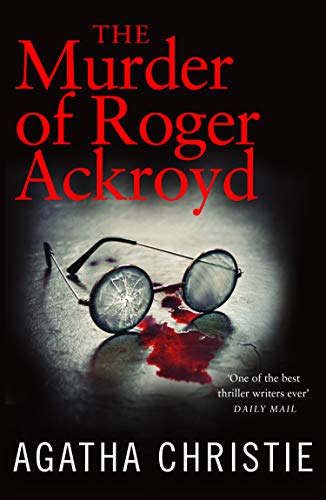 I don’t normally do spoiler reviews but The Murder of Roger Ackroyd, first published in 1926, is most famous for its ending and I wanted the opportunity to think about and discuss it.

In The Murder of Roger Ackroyd, the story begins gently enough with the musings of Dr James Sheppard. A patient, Mrs Ferrars, has died after overdosing on pills. His sister Caroline is an incorrigible gossip, which fills him with affectionate exasperation, even as learns from her information and insights. A new neighbour has arrived in the community, a Mr Porrot, who has retired to grow vegetable marrows.

In the evening he attends a dinner party at the home of a wealthy neighbour, Roger Ackroyd. Ackroyd was engaged to Mrs Ferrars and confides to Sheppard that he has reason to believe she took her own life. She was being blackmailed about her suspected involvement in the death of her first husband. He has a letter from her, but doesn’t open it. Sheppard leaves, but gets a call the same night and returns to the house. Ackroyd has been murdered.

Sheppard subsequently learns that his new neighbour isn’t called Mr Porrot at all, but is in fact the famous detective Hercule Poirot. Poirot is asked to look into the case, and immediately appears to take Sheppard into his confidence. They pursue the investigation together. However, at the end, Poirot rounds on Sheppard and says that he knows he is the murderer, and in fact has suspected him almost from the start. The manuscript which Sheppard has kept, detailing their investigation, becomes his suicide note, as he kills himself to save his sister the trauma of his exposure and trial.

While Christie was not the first to make her protagonist her killer, this is shocking – and would have been even more so at the time – for a number of reasons. First, Sheppard is a doctor. In the real world, doctors are trusted figures, they have both social status and our belief that they act in our best interests. Second, he is the narrator, and we tend to have an implicit belief that when someone is speaking to us in the first person, they are telling us the truth. Third, he has taken the role of sidekick and it is one of the conventions of crime fiction that the sidekick works loyally in the service of the detective. The doctor-as-sidekick also offers echoes of Holmes and Watson.

I read this book already knowing about the ending and, although I missed out on the surprise, I was able to see how cleverly the end is seeded, which is a different kind of pleasure. Although in one way Christie has broken the rules, she does give the reader a fair shout at solving the mystery because Sheppard (as narrator) never lies. He just omits.

I’m not a big fan of clue-based crime fiction, and must admit my interest wavered at certain points in the story – the lengthy consideration of the position of a chair in Ackroyd’s study, the finding of a goose quill and a ring – but these elements are combined with the more psychological storytelling that I do enjoy. A number of characters appear to have had a reason to kill Ackroyd, and it’s interesting to unravel their motivations (which can loosely be boiled down to money or sex). The secondary characters are all to some extent types, but there’s enough here to make them interesting. 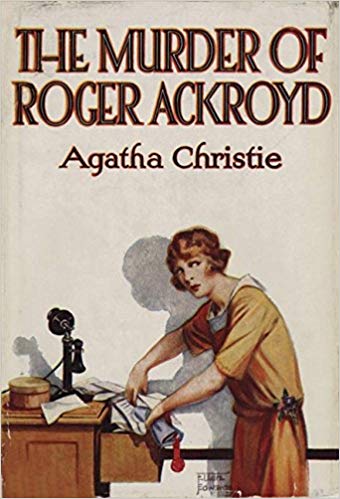 Poirot claims to have known Sheppard was guilty as soon as he realised he was at Ackroyd’s house that night. How? Although the clues are available to us all as readers, Poirot has additional resources, and fills in many of the gaps without the knowledge of the reader, revealing them only with a flourish at the end. He checks out a hunch which allows him to locate Ackroyd’s missing stepson, he has police contacts in Liverpool who offer vital information about the mysterious man who is near the house that night, and is able to establish that the steward of an American liner made a vital telephone call.

The most intriguing element is the manuscript that becomes Sheppard’s suicide note. The premise of the novel is that Sheppard, while working with Poirot to ‘solve’ the crime, is writing an account of their investigation. Poirot asks to read it before confronting him with the truth. Why is Sheppard writing it? This is never fully explained. Does he think he can outwit Poirot and that the manuscript might be published when Poirot implicates someone else? Or does he somehow know that he will fail and that this can only end with his unmasking? (It is notable that he doesn’t learn that his new neighbour is, in fact, Poirot until after the murder. Would he have held back from killing Ackroyd if he had known the great detective was at hand?)

Is the final manuscript an attempt at self-justification, even a form of vanity as he demonstrates his cleverness? There is also the irony that his suicide echoes that of Mrs Ferrars — they have both killed themselves to avoid shame.

First-person narration of course conceals as much as it reveals but the portrait of Sheppard it paints is a complex one. He is witty and is observant in some ways but shows little empathy or care for the people around him, whether patients or neighbours. He is impatient of his sister who shows much greater insight (one person’s gossip is another person’s interest and concern). The restrained quality of the writing suggests a man wrestling with a burden even before we know what it is. Seeing Caroline purely through his eyes also both limits what we understand of her and hints that there is much more that is unsaid.

There is some lovely writing and acerbic observation from Sheppard. He describes Ackroyd’s sister-in-law as “all chains and teeth and bones” and her handshake as “a handful of assorted knuckles and rings.” When Caroline has to choose which piece of gossip to share, she “visibly wavered for a second or two, much as a roulette ball might coyly hover between two numbers”.

I must admit I may have been a bit sniffy about Agatha Christie. I know I devoured her books in my teens, although I always liked Marple more (in practice I probably read whatever the library happened to have). My perception has perhaps been coloured by the numerous TV adaptations which we all can’t help absorbing by osmosis even if we don’t sit down to watch them. I’m also perhaps put off by living near her birthplace and what can at times feel like an Agatha Christie theme park.

However, I’ve found The Murder of Roger Ackroyd fascinating. It’s made me reassess how I feel about Agatha Christie and want to look again at her work.

View The Murder of Roger Ackroyd on Goodreads

Take a look at my novel End of the Bay, a playful take on the cosy mystery set in Torquay, the home of Agatha Christie.