I’ve been a fan of Paul Simon since I saw Simon and Garfunkel’s The Concert in Central Park on TV in my teens. I was enthralled by the songs — in particular the lyrics. When Simon sang the ‘Kathy I’m lost’ line from ‘America’ I was sure, in my mawkish adolescent way, that the words were meant just for me.

I was obsessed with music in my teens and twenties but I don’t listen so much these days. Writing and reading probably take up the part of my brain that used to listen to the same album for hours or pore over the lyrics on the sleeve, looking for meaning. While working on my last novel though, I turned back to music. I was stuck in the murky middle, knotted up with plot problems. I felt like I had lost my way. I had always loved the power of words to capture mood, atmosphere, emotion. Now I was spending my days trying to get my characters out the door.

Music has that emotional resonance, and Paul Simon’s more than most. Many of his songs tell stories, but they do it through melody, rhythm and imagery. How could I get back to that? 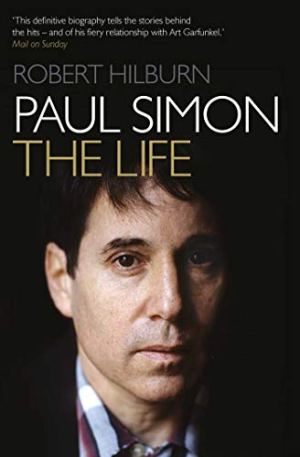 So I listened to the music again and that got me interested in the man which led me to read The Life. I’m really glad I did.

Paul Simon is famously reticent about his private life, so if you’re expecting juicy revelations you’ll be disappointed. The key facts are covered but, although Simon co-operated with Hilburn, he has said little that would be new to dedicated fans. For example, much of what is in the book about his second marriage, to Carrie Fisher, comes from her memoirs, rather than from him.

This doesn’t bother me too much. On a soap opera level of course I’d be curious, but I don’t think that you need — or have the right — to know about the artist to appreciate the work.

The relationship that most intrigues me isn’t with any of his three wives but with Art Garfunkel. They were friends from childhood, and first sang together at the age of 13. From there they put all their energy into music, emulating the Everly Brothers to sing in close harmony. They made a record together, as Tom and Jerry, at the age of 15, before going their separate ways.

Simon continued writing and singing, making demo tapes for songwriters to earn money in college before coming to England where he first enjoyed modest success as a folk singer. Garfunkel studied Architecture. When Simon returned, looking for a recording contract, he asked Garfunkel to come with him to sing harmonies. They recorded a song called ‘The Sound of Silence’. Nothing happened. Then suddenly it did, and the rest is history.

Hilburn vividly captures their relationship, with its odd combination of intimacy and rivalry. It veers into periods of hostility and then back. There was always an imbalance, because Simon wrote all the songs and played guitar, as well as singing. Later, he wanted to explore elements, in particular rhythm, which did not interest Garfunkel or suit his vocal style. This, as well as personal animosity, led to them going their separate ways, although they have reunited, toured, and fallen out again numerous times over the years.

What I most enjoyed about this book is the insights it gives into Simon’s creative process. In the Simon and Garfunkel period, they both took an active part in arrangement and production of the songs from an early stage and shared an obsessive attention to detail. The years spent recording demos meant Simon had a particularly good grounding in technique. (He also retained his publishing rights, on the advice of his musician father, which was almost unheard of for a performer at that time.)

The book describes Simon’s evolving process as a solo artist, his growing fascination with world music, the increasing complexity of the arrangements, and the way he layers melodies onto rhythms and last of all, writes the words. Although his output over his long career is impressive, he doesn’t consider himself prolific. There’s a story about how he gave some lyrics to Philip Glass for a project he was working on, and then realised they would be perfect for ‘Boy in the Bubble’ from Graceland. He asked Glass for them back, and Glass reluctantly agreed.

There are also some fascinating accounts of how he wrote the lyrics for his most famous songs, combining fact and fiction. It turns out that Kathy never did go on a road trip with him across America. (Astonishingly, given that it’s one of my favourite songs, I’d never noticed till I read it in the book that ‘America’ doesn’t have any rhymes in it.) His nine-year-old son didn’t accompany him on his trip to Graceland on the eponymous track from the album he made in South Africa.

Some of the leaps he makes are intuitive. He describes how, when he has a tune he likes, he sometimes sings randomly to it until he gets an idea for a lyric. He had one song which he initially sang as ‘going home’. He felt this was too clichéd and played with different words with a similar sound. Finally he hit upon ‘Kodachrome’ which initially felt odd but in fact was perfect for the themes of the song – the sense of a knowing nostalgia, the way we remember things as much more bright and intense than they felt at the time.

Another thing that came through to me is Simon’s humour, which is perhaps missed by people who only see his music as melancholic. For many years he was a regular on Saturday Night Live and this playfulness comes through in a number of his songs.

At the end of the book, published in late 2018, Simon was contemplating giving up writing. In his latest album, In the Blue Light, he revisit some of his lesser known songs, reimagining them and working with new collaborators. (My favourite is the darkly comic ‘Pigs, Sheep and Wolves’, a fable about race and law enforcement which is more topical than ever).

I loved this book. It made me listen afresh to some favourite songs and discover new ones. More than that, it made me think about the creative process and how craft, application and intuition combine. Of course, most of us can’t be great artists like Paul Simon but we have the chance to learn from him, thanks to this perceptive and comprehensive biography.

Enjoyed this? Check out songwriting duo Sodajerker’s podcast with Paul Simon. (If you’re interested in music or creativity in general, Sodajerker’s interviews are always fascinating.)