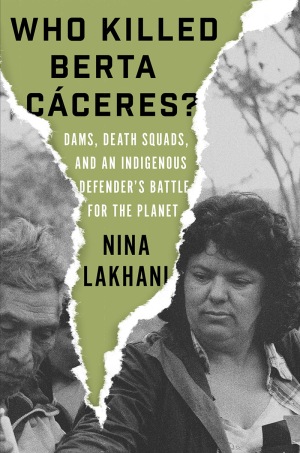 Berta Cáceres was a Honduran political activist, fighting for environmental and indigenous rights. She was murdered in 2016 by hired assassins.

Guardian journalist Nina Lakhani has been following her story for a number of years. In Who Killed Berta Cáceres?, she skilfully threads together the disparate elements of this story: the political context in Honduras, Berta’s life and campaigning, and the aftermath of her death and the investigation.

Berta was an internationally known figure, winner of the Goldman Prize in 2015 for her environmental work with indigenous organisations, opposing the construction of four giant dams. Despite that she was still murdered.

While a number of men were convicted of her murder and the court confirmed that Desa, the company building the dam, was responsible for ordering her murder, the people who hired the hitmen have still not faced justice.

Lakhani draws on her long-established relationships with Berta, her allies and her family to tell the personal story of Berta alongside the political developments. She presents a nuanced account of Berta, and shows how her conviction and commitment impacted on those around her, and the dangers she confronted every day.

The book is underpinned by a detailed understanding of the political context. As a general reader, I felt a bit overwhelmed at times by all the organisations and their acronyms, but Lakhani’s knowledge and commitment shines through.

For anyone with an interest in environmentalism, corporate corruption or the politics of the region, this is a comprehensive and powerful account.

Enjoyed this? Take a look at my review of Who Owns England? by Guy Shrubsole