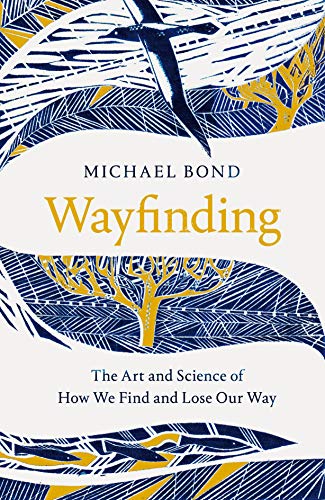 As someone with quite a poor sense of direction I was intrigued to read Wayfinding. Written by science journalist Michael Bond. It takes you through every aspect of the science and psychology of knowing where you are and where you are going.

Bond begins with the innate processes in the brain that help us orientate (and those that can undermine us) – the role of the hippocampus and the cells which help us form cognitive maps. He considers how we learn to navigate, writing about how children first learn their sense of direction through exploration and improvisation. Sadly the more restricted lives of children now means they may not develop those skills.

Bond explains that the two main techniques people use for wayfinding are egocentric and spatial. The egocentric method means plotting a journey from where you are now, knowing, for example that you have to take the first left and the second right. Good navigators are more likely to take a spatial approach – they have a birds-eye view of a place. They are constantly alert to features in the landscape and their relation to each other.

Bond discusses the way wayfinding and memory interact – think of, say, memory palaces. We often store memories by thinking about the place where we were when we made them – not just that romantic beach holiday, but mundane ones. To remember where you put your keys, you might think back to where you were when you last had them. I also think that the sense of helpless incredulity I feel when I’m lost is similar to that when you lose an object – you no longer trust the evidence of your senses, convinced that inanimate objects are conspiring against you to not be where they should.

Loss of sense of place is a key feature of dementia. Evidence shows that for people with Alzheimer’s, loss of spatial awareness is detectable before memory loss. Bond suggests that the desire to wander shown by many people with dementia arises out of a feeling of being lost and trying to return to somewhere they can recognise, in much the same way as people who are literally lost do.

Our mental wellbeing and our sense of where we are in the world are inextricably bound. Many metaphors we use for our emotional state relate to location – lost, found, grounded, adrift, at home. We talk about close friends and distant relatives. There is also a suggestion that strengthening the connections in the brain that deal with wayfinding might be protective against dementia.

Emergency services and rescue teams have made use of the growing body of research on how people react when they are lost and where they go. One finding Bond cites is that when people panic, they have a tendency to keep walking. We can recognise that understandable desire to do something. What actually happens is they end up walking in circles. The advice from the experts is to stay in one place.

One story Bond describes is particularly moving. Gerry Largay went missing on the Appalachian Trail. She was an experienced walker who did everything right but sadly she was not rescued. Her body (and her journal giving an account of her final days) were only found two years later.

I found Wayfinding fascinating. It’s an accessible read for a non-scientist. The one part I found challenging was the section on the neuroscience, but it became clearer as I read the rest of the book – and I was interested enough to go back and read it again after I finished.

This book has actually changed my behaviour. I have made more of an effort to develop a spatial view on my lockdown walks, not just to appreciate interesting buildings or trees or gardens, but to take note of how they relate to each other. Once we are able to visit unfamiliar places again, I will hopefully become a better navigator, thanks to Wayfinding!

I received a copy of Wayfinding from the publisher via Netgalley.
View Wayfinding on Goodreads

For another interesting take on wayfinding – I enjoyed this post on CrimeReads about the Dutch tradition of dropping – leaving teenagers blindfolded in the wood to find their way home with the aid of only compasses, maps, the wind and the stars.