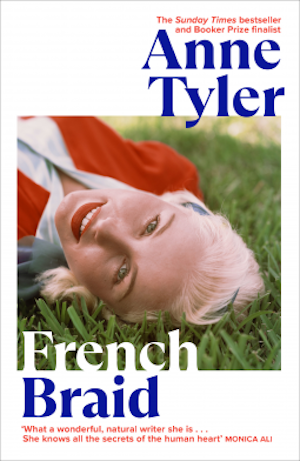 French Braid begins in 2010 as a young couple return on a train from a family visit, discussing their different backgrounds and how they have been shaped by them. This leads into the story of the Garrett family, told over three generations, beginning in the fifties and ending during the pandemic.

Each chapter relates a different event and period. The key Tyler ingredients are here. There are family secrets and rivalries, awkward get-togethers, tensions and estrangements, precious moments of connection.

It begins with a holiday by a lake in 1959. The party are an apparently ill-matched couple in Mercy and Robin Garrett, and their three children. Mercy loves to paint and is absorbed in her inner life, Robin is practical and conventional. Their three children are equally unalike, so that teenager Alice thinks an observer of them on the beach would assume they were strangers, each having a dramatically different experience in the same space.

Through the generations of the Garrett family, attitudes change, people die, are born, marry, divorce, but patterns recur – hence the slightly laboured analogy of the ripples left by a French braid after the hair is untied. Tyler captures the oddity of family life, where people who may have little in common are forced into close quarters, like strangers clinging to the same life raft.

Tyler’s books are sometimes about dark events – unhappy families, humiliations, stark and sudden losses – and sometimes they are more humorous as they explore human foibles and our inability to connect. (Of course, I’m simplifying, many of her books combine elements of both.)

French Braid, though, for me sits uneasily in the middle. There are no great dramas, but nor did it make me laugh. The chapters didn’t have the neat sense of completeness of linked stories (as used to great effect by Elizabeth Strout), nor was there a strong narrative arc pulling you forward.

I wonder if Tyler was enjoying wrongfooting the reader. There are a few points where she sets up situations which suggest a dramatic outcome but which instead lead to more prosaic ups and downs. After all, these are the lives most of us live, most of the time.

Not my favourite Anne Tyler novel, then, but if like me you’re a fan, you’ll probably enjoy returning to her world.


Want more like this? Anne Tyler features in my pick of 15 great novels about mothers