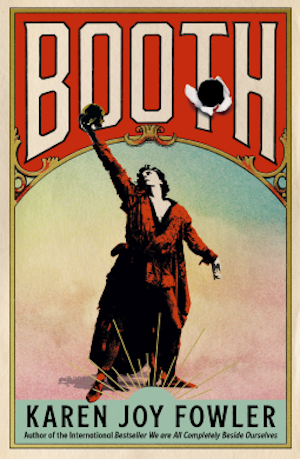 I didn’t know anything about John Wilkes Booth apart from the fact that he assassinated Abraham Lincoln, so Booth was an informative as well as an intriguing novel. Karen Joy Fowler’s focus is not on John himself, but on his family. What did it mean to them to be forever associated with a notorious killer?

Booth begins as John’s parents set up home in a remote farm in Maryland. They have married in England and Junius Booth has neglected to tell his bride, Mary Ann Holmes, where she is going to have to live. He is a successful actor and spends most of his life touring and performing Shakespeare, while she is left to tend the farm with his father (who has a lot to say but doesn’t contribute much). She gives birth to ten children and suffers the loss of many in childhood.

The narrative moves seamlessly between voices. There is an omniscient narrator, situating the story of the family in the historical context, and opening each chapter with vignettes from Lincoln’s life. This gives the sense of the two men moving inexorably closer, while also confining John to the margins – we are some way into the novel before he is even born. This is contrasted with the immediate and subjective voices of a number of John’s siblings, telling their own story, offering glimpses of John from childhood onwards.

Most poignant for me is Rosalie, the eldest daughter. She is haunted by the ghosts of her dead siblings, while also being forced to take responsibility not only for the surviving children but for her distraught mother. She begins as a thoughtful, perceptive child but her identity is steadily erased in adulthood and she finds herself moving between relatives, with no choice or autonomy. (An author’s note indicates that Fowler had to invent more with Rosalie than the other characters as there is so little source material about her.)

By contrast, the young Edwin, who is also sensitive and insightful, is forced into caring for his father as he tours the theatrical circuit. Junius’s erratic temper and alcohol consumption threaten to overshadow his performances. However, Edwin later escapes and enjoys success and acclaim as an actor himself (though he pays a price).

Junius Booth is both a dominant figure and an absent one. He is a political radical, a vegetarian, a man of creative flair and periods of instability, perhaps brought on by grief at the losses he experiences. The family quote Shakespeare at each other and three of the sons, including John, become actors. Within the frame of the novel, it is both surprising and understandable that John is pro-secession and pro-slavery, putting him at odds with the values of the rest of his family, while still retaining their affection.

Fowler shows how slavery in Maryland, while less overtly brutal than in some states, had other cruel impacts. The Booths employ a free black man, Joe Hall. His wife, Ann, is a slave on a neighbouring farm but is allowed to come and work for the Booths and earn money. Their children are born as slaves but they hope to save enough to buy both their freedom and Ann’s. Many families were in this position, parents, unable to buy all their children, forced to choose between siblings, those siblings growing up divided by their different fates.

Civil war and disorder come ever closer to home for the Booths, and we see events through the eyes of John’s siblings. Fowler keeps the story suspenseful – we know what will happen but not how it unfolds.

Booth is an interesting telling of the story of a family, from the domestic details of births, marriages, sibling rivalries, grief and joy, to the wider historical context and the factors that led to John’s increasing political estrangement from his family, even while they remained close.

John remains elusive, almost as ghostly as his dead siblings. The aftermath of the assassination, and its effect on his family, suggests his behaviour is as disturbing and incomprehensible to them as to the world.

I received a copy of Booth from the publisher via NetGalley.
View Booth on Goodreads